When I was trying so hard to become pregnant for all those years, I never really gave a ton of thought to breastfeeding. I knew I wanted to try it. But I really didn't set a lot of expectations. One way or another.

Then Liddy arrived and it just "took". There was no painful latches, cracked or bleeding nipples. It just worked. When she was a month old, I developed a yeast infection nipples which, wasn't a ton of fun, but we treated it, and moved on. I made it to 6 weeks, then 3 months, then 6 months of exclusively breastfeeding. Quite frankly, I was amazed at myself.

So we kept going. I decided, might as well shoot for a year. A year came, and a year went. And the breastfeeding continued. She's never slept through the night. She doesn't even sleep in her crib. She doesn't soothe herself to sleep, and usually has to be nursed to sleep at night. And you know what? I'm okay with all of that. She is healthy and happy. I love seeing her sweet, sleeping face lying between us at night. There's a day where she won't sleep with us and I know I'll miss it. So for now, it's our normal. It's not for everyone, but it works for us.

So many people have said their babes kinda just weaned themselves around year one. Liddy is pretty adamant about her mama and her mama's "babas". Well, lets be honest, we kinda go together, so not sure which she's really more into. But here we are, knocking on the door of 18 months old and I don't see any signs of her being ready to wean.

I've had in my mind that we'd be done sometime in her second year. I've never imagined that I would be a mom, nursing a toddler. But here I am. But I guess I'm just letting her take the lead on this one. I asked her last night, what she would say if I said "no more babas"? She burst into tears. Point taken, Liddy.

This is all new and different for me. I don't have friends that nursed this long and while no one has said anything to me (friends or family) in a negative way, I know they are somewhat surprised that it's still going.

My breasts went from a 32D to a 32G by week 12 of my pregnancy and they have pretty much stuck there. So, trust me, if she were done, I wouldn't argue. I'll probably be knocking on the door of a plastic surgeon begging for a reduction when it's all over with.

She's the only baby I will ever carry. The only baby I'll ever get to breastfeed. Shouldn't I just try and have as few of regrets as possible during this most precious time in her life? 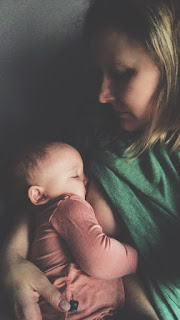 My littles are quickly approaching 18 months and 2 years old. I know I don't blog often anymore. With three toddlers, the time is just not there anymore. But, I do hope for updates over the next few months, so stay tuned!