We've got another hiccup

My mock cycle has officially been called a big fat bust.

I guess it's time to lay out all the details of the past few weeks. Who knows, maybe one of you ladies can offer up some advise.

October 2 - still no period 8 weeks after my methotrexate shot. Lining was 2.5mm

October 5 - PIO shot to attempt to induce a period

October 17 - e2 levels were 300, patches seem to be absorbing and I'm slowly increasing to 4 per day

Mock cycle cancelled and I was instructed to take another PIO shot. I was told that even spotting would be considered cycle day 1 due to my super thin lining. We'll then start the mock cycle over. At this point, I've not had a period since June 14th (my period prior to my ectopic pregnancy). I'm very skeptical that I'll have one since last time I took a PIO shot, I also did not get a period.

I think I've mentioned before that my biggest fear these past several months was that I would have these perfect embryos...and no where to put them. I'm terrified that this premonition is coming true. What would we do if my lining is just kaput? Surrogacy is a whole different ballgame that we can't afford. Should I even be thinking this yet? The last time my lining measured a decent thickness was November 2012. Granted this past year has been frocked with surgery, crazy hormones, a wonky IVF and an ectopic pregnancy, so I realize, there's not been a whole lot of opportunities to monitor my lining...but still.

I'd be lying if I said I wasn't concerned. I really, really am.

On a more fun note, I've been a little MIA with comments and replies lately and I apologize. I've been completely overwhelmed planning my husbands surprise 40th birthday party this past weekend. We had folks fly in from all over and house guests for the 4 days...all while keeping it secret!

(not to mention sneaking in ultrasounds and blood work and ramped up on hormones!!)

Well, I'm exhausted, but it was a success!! He loved it and was thrilled to have his family and closest friends to celebrate with him. 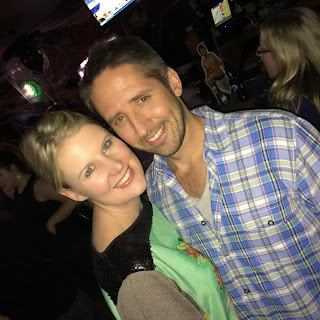 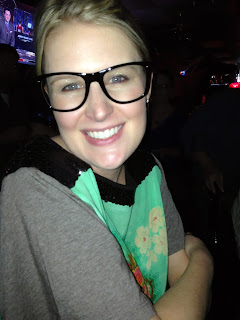 Who ever heard of handing out nerdy glasses at a bar?? Regardless, I had fun with them!

Thursday is his actual birthday and I plan on a really quiet night, just him and I on the couch as he enters a new decade!!