When the boys were born in July, my posts were short and quick. I feel like it's finally time to share the whole story of when they came into this world. My world.

Our plan had been to head down to Texas on July 25th. That would have been between 34-35 weeks pregnant. The average time that twins come is 35 weeks. I figured we were doing good. Especially since Kelly usually went past her due date.

I had one last business trip scheduled for the week of July 13th. I was heading to Portland for a conference. Was excited that I even had a girls night planned with two awesome gals that have supported me through my diminished ovarian reserve and surrogacy. But...a nagging feeling that what if something happened while I was on the other side of the country was there weeks before the trip. It nagged me enough that on that Monday morning, July 13th, when I left the house with my bag packed for Portland, our dining room was completely packed with everything that we would take to Texas. Every. Single. Thing was ready.

Around 10 am I sat in my office (my flight wasn't until later that afternoon) I received a message from Kelly. She was at her regularly scheduled OB appointment and her blood pressure was elevated and she had protein in her urine. The OB wanted her admitted to the hospital and thought we should come to Texas. He said best case scenario the babies would probably come within a week. Worst case, around 3 days. (Did I ever mention this was Kelly's birthday!?) So I went into my super planning mode and within an hour had my flight changed from Portland to Corpus Christi and Trevor was headed home to pack up the car to drive to Texas. (This would be where my proactive planning/packing was REALLY helpful)

I was at the hospital with Kelly by dinner time and stayed on a little cot next to her bed the next few days. My husband's brother was kind enough to fly into an airport on Trevor's journey south so he didn't drive alone. They arrived the following evening.

While Kelly's blood pressure actually stabilized over the next few days, her 24 hour urine collection was extremely high. Like in the 5000's. So we knew that this was definitely pre-eclampsia. We were faced with decisions like do we go home and monitor? Do we transfer to one of the larger hospitals that has a NICU? Do we stay at the hospital with our OB that we adore, that knows us and our situation? We ultimately made the decision that on Wednesday evening we would go home with the plan to go into the MFM's office first thing Thursday for him to make the call as to whether or not she be admitted to his hospital to be monitored for the remainder of the pregnancy, or not. However, as we're packing up to go home, her blood pressure spiked again. The OB decided it would be best to keep her hospitalized and have her transferred. Unfortunately, the other hospital would take her because they were out of beds. So we were kept at the small hospital overnight to be monitored and hopefully would be transferred on Thursday. Trevor had came to visit that day and early evening when knew Kelly and I would be staying another night, he left. An hour or so later, Kelly started to have visual changes. Bright spots, if you will. Our OB had told me that if that happened, he wanted me to text him right away. I did and he came back to our room. He said his concern was that the eclampsia was getting more severe as visual changes typically meant it was getting to her brain. The best option was to deliver the babies.

He explained that while they didn't have a NICU and we were literally hours away from being 33 weeks, and she couldn't be transferred, that he would call in the Children's Hospital and have NICU teams sent for each baby. They would be delivered, stabilized and then transferred. I trusted this doctor completely. There was a reason we chose him and it was the right decision.

Right about that time, Trevor text me a picture of the beer he just ordered, you know, after his very long drive and finally getting settled for the night...my response was "you need to come back". HA!

The doctor did another ultrasound to determine position of the babies. We had still hoped that just maybe she could have them vaginally, but both were transverse and it wasn't an option. They started her on magnesium and began to prep for a c-section. We were only waiting on Trevor and Kelly's husband.

The great thing about this doctor and this small hometown hospital, was that they truly cared about this unique situation and experience. The allowed Kelly's husband, myself and Trevor all to be in the operating room for the birth. No other hospital in Corpus Christi had said they would allow that. I didn't realize how anxious I was until Casey was born and let out that beautiful cry followed by Britton who did the same. They were tiny...but perfect.

They were born at 12:14 am and 12:16 am on Thursday, July 16th. We had made it to 33 weeks by only minutes. Even better, the boys share a birthday with the amazing doctor that delivered them.

The boys were both stabilized and I requested that they be wheeled into Kelly's room where she was recovering before they be transferred. I knew it would be a while before Kelly would be able to see them again. I hope it meant as much to her those moments as it did to me. She was absolutely amazing. So strong, brave and quite literally my hero. Her recovery was hard. She had complications and had to have multiple blood transfusions over the next few days. I'm in awe that I was lucky enough to have THIS woman care for my babies in the most beautiful way possible.

And care for them she did. Because while small at 3 lbs 12 oz and 3lbs 15 oz, they were mighty. Their entire stay at the NICU was one of growth and progress. Not one setback the entire 23 and 26 days of our stay there. Those boys are healthy and happy because of her.

It makes me sad that I don't know if Kelly can be a surrogate again. I know CCRM would disqualify her because of the severe eclampsia. I know that even if there was an RE somewhere that did allow her to be a carrier, she shouldn't carry twins again. I will always feel guilty for this. Whether or not she hoped to do another surrogate journey or not, I would hate that we took that decision away from her. Because truly, she's amazing. Her whole family is amazing. And I'm so blessed to have her and them in my life always. 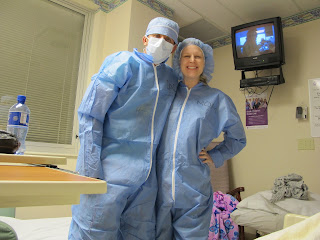 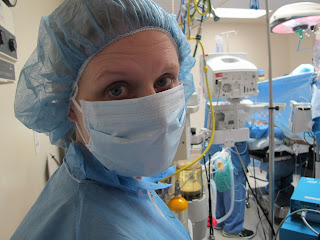 In the OR...and super anxious 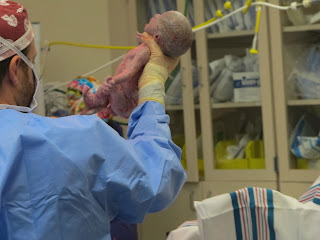 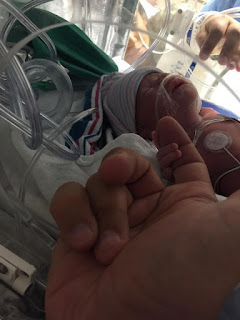 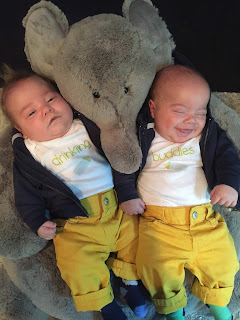