First of all, I've been a wee bit absent lately. I apologize. I had gotten so attached to so many threads and blogs that I literally was spending all day at work and at home, just keeping up. My job needed me to rejoin the world, so I've tried very hard to check blogs only in the evening for a few minutes, so that I'm not neglecting my husband and I've left several of the threads I was on. Not that I don't check in with the lovely ladies on there once a week or so, but the constant email notifications that had me scurrying online 20-30 times a day, had become to much. So if you've noticed that I've been less comment-y or wondered where I've been. There you have it. I'm still thinking of you all so often and I AM still reading. Promise.

I guess part of the step back was also the limbo I've been in. I needed a mental break before Goose's cycle began. Before my mock cycle begins. Just to be me. That helped...a little. But as you all know. Infertility is never not there. It's still on my mind, daily, hourly...you get it.

Last Friday was Goose's baseline. I was only going to hear from CCRM if the cycle was not going to continue. So I waited all day for the phone NOT to ring. It didn't. So we went on about our weekend and on Sunday, gave a little shout out to Goose as she started her stims.

Yesterday was her first monitoring appointment. I was told they would not update me, that I would need to call or email later in the afternoon (to allow for blood work to be back) and then they would respond. Remember, CCRM is two hours behind me, so with great torture, I waited until close to 4:30 to email my nurse. As soon as I hit send, I headed into my barre class for a distraction. I knew otherwise, I'd just stare at my phone for who knows how long it would take her to reply.

After my class, I had an email...and a missed call. Goose's appointment did not go well. They weren't specific on this, but said they were upping her meds and rechecking on Friday, but there was a possibility that this cycle would be cancelled.

I can only assume that after only 3 days of stims, she really must not have had many follicles for them to already be considering canceling. It certainly does not sound good.

I know that with my own eggs, it would be a different story. They would just keep pumping me with meds to get as many eggs as possible. With donor eggs it's different. They expect a lot. They won't go forward without a good number that they are happy with.

All in all, I'm numb. I'm shocked. I feel a bit blindsided. After all the bad news we've received these past few years, to my horrible IVF response, the last thing I expected was for my donor not to respond. Her tests were all fantastic and she has a child of her own. So it makes no sense. I have been so worried about my body once we transfer. I mean, it's always been me. Never once did this scenario cross my mind.

T is out of town, and what hurts was how shocked he was when I called him. He has always been the "it will all work out" mentality kind of guy. Lately, I think this constant string of bad news is starting to really effect that easy going, laid back attitude that I've always admired. Twice this summer, he took two photos on his phone that I went and looked at again because of how I felt/feel right now. Because to be honest...I'm really scared that this all means that someone/somewhere is telling us we aren't meant to be parents. 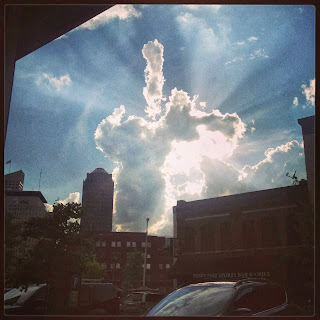 He took this one downtown Indy over lunch on June 19th...a few days after our failed IVF 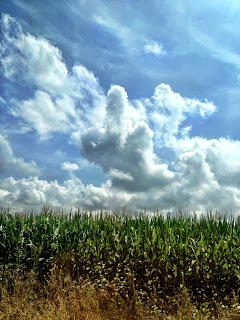 He took this one on his camping trip on August 9...when we found out our pregnancy was ectopic.

Do I really believe the that a higher power or the universe is really giving us the middle finger?? No. At least, not really (okay, maybe today I feel like it a little). But it certainly does present a bit of irony.
Posted by Suzanne at 9:54 AM