Officially in the 2ww!

The past 5 days has been a complete whirlwind. I can't believe how fast the holiday weekend flew by and that it's back to work tomorrow.

I think I last left off with, "holy cow, it's 9 dpo and I'm triggering" post. We went in on Thursday morning with T's sample firmly situated between bra and boob for our IUI. We were one of two couples that they were seeing that day. So should they have mixed up the sperm, I guess we'll know who they mixed it up with...at least this was how we chose to joke about our early Thanksgiving adventure. Once we got back there, they were in and out in 30 seconds. The nurse kept saying how great the catheter went in and I didn't have any cramps during or after. We also found out that T's "contribution" prewash was a whopping 244 MILLION! Big high five to my awesome guy. Post wash was 51 million and 90% motility. So they definitely took the strongest and fastest! I was home in time to make my mother's sweet potato biscuits all before lunch.


This was one of the first holiday's that we haven't traveled to see family. Mainly because we knew we'd be traveling over Christmas, so next month won't be a medicated cycle. For Thanksgiving, we went to a close friends mother's house for a fantastic dinner. I was a little nervous because, well, there were almost more children than their were adults. Luckily all the kids were over the age of 4 and didn't really strike my overly sensitive baby radar. I actually really enjoyed playing card games and having tea parties with the kids. I came home with 4 more homemade necklaces and bracelets than I had than when I left that morning. The funny thing was that there were TWO sets of twins and one other boy that had been conceived via fertility treatments. One of the ladies even saw my RE and raved about him. Her son is now 10 years old. T went to a bar with the guys for an hour or so and said they were trying to get him to take shots and he finally broke down and said he wasn't drinking because he had to give a sample the next day, he said every guy there, groaned and said, oh yeah, we've been there. Why is it that SO many people have these kind of issues these days?!

Friday morning I got up at 7 am, so that I could hit the mall. I was there at 8 am when they opened and hit Anthropologie, Saks and Crate and Barrel. Score!! I was home by 9:15, a full hour before we had to leave for the RE's office again. Of course, the same couple was there again for their second IUI...too funny, we had a nice nod and laugh as they entered the waiting room. The actual IUI went super fast again and T's sperm count was almost the same as the day before. 234 million prewash, 44 millions post. Another job well done. We left, had lunch and went to see Silver Linings Playbook. Loved it! It was so good. We went out for hibachi with T's sister for dinner and had a great time! We ended a perfect day with a little baby dancing! Finally! Since I had been on AF almost up until my u/s on Wednesday, it had been almost 2 weeks. Saturday, we went to see Lincoln. Tis the season to see movies, right!? After that, we went home decorated our tree and spent the evening in front of the fire watching tv. Another fantastic day! (including more baby dancing!)

Sunday, more baby dancing. I'm pretty sure, the bases are covered! He's officially on a break. I start taking my progesterone supplement tomorrow and go in for my p4 test next Monday. Beta would be the following Monday. 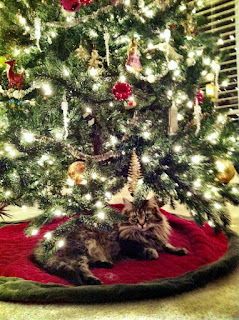 I'll leave you with a little pic of the oldest and the boss of our house, Sidney. Our cats, LOVE Christmas because it means they get to sleep under the Christmas tree.