Thanks so much everyone for the kind words of support on my last post. It felt so great to have so much positive reassurance. I will admit, I can send myself into a tailspin over just the smallest decisions, so a decision that cost as much as this one, really was not good for my poor delicate heart.

However, I've felt a kind of peace these last few days that I've not had in a long time. I don't know if this IVF cycle will work. However, I also can't say that going to CCRM would work either. I finally feel like I'm able to lay it all on the line and handing my trust over to my doctor and his staff, and it's been a great weight off of my shoulders. So I know that for now, for this particular cycle, this is the very best decision for both of us.

A few of you asked about Trevor and how he felt and if he was supportive. The man doesn't have a unsupportive bone in his body. He's been a rock star about all things fertility. He's agreed with me, shared his thoughts and talked out ever scenario, every step of the way. While he did like CCRM and their stats, he also does like the idea of doing at least 1 round, in Chicago. Logistically it's easier and I believe as I learn more about this process, and how the hormones will affect my body, easier, is probably better. If I become an IVF pro, maybe more complicated will make sense at that point.

I do have one exciting (to me) update. I spoke with my doctor in Chicago about my protocol. While he plans to do the antagonist protocol with fairly high dosages of meds, CCRM was planning on doing an aggressive EPP protocol with testosterone. My doctor in Chicago has agreed to let me add the testosterone to my protocol with him. Small battle one. I've heard really good things and he did say that it has shown a small improvement and is something they do when they are pulling out all the stops. (Um, like me? Lets remember, I have some pretty bottom of the barrel AMH numbers) He said it would cost me an additional $700 though.

I tried to not choke on that, not because of the cost, but because $700 in the grand scheme of things, is kinda peanuts.

Well, here we go...I've officially started my journey into IVF. I'm 2 days into my birth control pills. I will start my injections on April 23rd, with an estimated retrieval on May 4th.

Here's to hopefully keeping the hormones in check and not turning into a raging bitch over the next 2 months!!

This was technically my sisters last hurrah, as it was her bachelorette party, but I'd also like to think of it as mine as well. Here's a picture from our great weekend at Wrightsville Beach!! 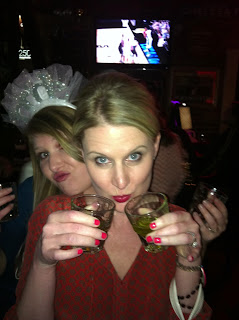 Anyone ever heard of a "pickle back"? Well, I hadn't either. This was me about to experience on for the first time. VERY strange, yet, not as bad as I was expecting. It's a shot of whiskey followed quickly by a shot of pickle juice.
Posted by Suzanne at 1:23 PM