So all these ladies on the boards I'm on BC and Ovagraph keep mentioning soft cups. Several ladies even said that was what they did differently when they got their BFP. So of course, me being a little adventurous and ready to try anything, went out earlier this week and bought a little pack of soft cups. Last night, hubby and I did our thing and then I inserted my soft cup! So romantic.

So this morning comes. Um...I can't get it out. T is standing there, like, "are you going to have to go to the doctor to get that out, cause that would be hilarious". He's so supportive in these type of situations. So you are supposed to be able to hook your finger around the rim and pull it out. Well it was so high that I could touch the rim, but my fingers weren't long enough to "hook" it.

So with freshly cleaned hands, husband was able to pull out the soft cup. Thank goodness. He then proceeded to throw it at me...gross. Very funny, T.

So his first reaction was "you aren't going to use that again are you?" Well...that's undecided. Cause it certainly kept all his little sperm-ies way up there close to my cervix!! We'll see come tomorrow, either way, at least he's now been trained on removing soft cups.

One other tidbit, I informed him that soft cups were actually used for women during AF. His look of sheer horror imaging that cup full of "AF" was simply priceless.

He did ask if I was going to blog about this and I gave him an astounding "oh, hell yeah!". 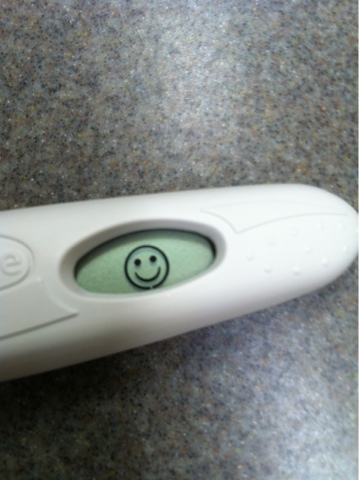